Previous Post
A Quick Spin on Dizziness, Vertigo and Other Balance Disorders
Next Post
Stressed Out? A Guide to Signs, Symptoms 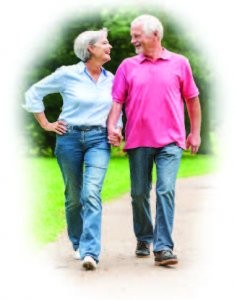 “Walking is man’s best medicine.” Hippocrates
Put away the handheld brain games and turn your focus from lifelong learning to lifelong walking. The road to sustaining brain health is an active one and taking that first step, followed by thousands more on a daily basis, can make an enormous difference in quality of life in your later years. Arthur Kramer, PhD, director of the Beckman Institute for Advanced Science and Technology at the University of Illinois, has amassed decades of research that clearly points to the prescience of Hippocrates’s ancient wisdom. His studies have become a focus of public health policy as well, sparked by 10,000 Baby Boomers crossing the over-65 threshold each day for the next 15 years, each hoping to age with vigor and dignity intact. We checked in with Dr. Kramer for an update on how physical activity keeps the brain healthy over the lifespan.

What are the most striking results seen in your research?
Our 2006 study was one of the first to report actual increases in brain volume in the prefrontal and temporal cortices of seniors who participated in aerobic exercise. These areas of the brain normally decline with age, but in our group, significant improvements in cognitive performance and memory were noted.  We subsequently explored the impact of exercise on white matter, which allows information to be transferred within the brain, and found that connectivity is markedly improved, which is linked to more efficient memory, attention and decision making capabilities. All this points to the fact that age-related cognitive and brain changes are not inevitable, and can actually be reversed.

Why does exercise trigger these changes?
Several theories: increased blood flow, which improves cerebrovascular health; the release of proteins in the brain that stimulate the growth of new neurons; and the benefits of glucose and lipid metabolism which bring nourishment to the brain.

What type of exercise is most effective?
Only modest increases in physical activity are needed.  Walking 40 minutes three times a week for a year, at up to 70 percent of maximum heart rate, resulted in increased volume of the hippocampus, a part of the brain responsible for memory. You don’t have to run marathons – just walk, bike or swim at moderate intensity.

Tell us why you joined an international group of leading scientists who posted a strongly worded statement on the Stanford Center on Longevity website as to the unproven efficacy of ‘brain games.’
We felt that the scientific literature does not support claims made by the manufacturers of software-based brain games…that these can make people smarter, more alert, able to learn faster, and even prevent or reverse Alzheimer’s disease. What we discerned from the research was that when people practice a task repeatedly, they will get better at that task, but it is not necessarily applicable to real-world functions. The relationship between brain training games and real-world performance and cognition needs to be explicitly tested. Unfortunately, this is rarely done. Further, time spent on brain training can be better used for activities we know improve cognitive functioning – aerobic exercise, learning a new sport or a new language, staying socially connected. Our consensus was that the promise of a magic bullet detracts from the best evidence to date…cognitive health in old age reflects the long-term effects of healthy, engaged lifestyles.

As a contributor to the recent Institute of Medicine report on cognitive aging, what lifestyle modifications do you suggest?
Being physically active is unquestionably a top recommendation for enhancing cognition and longevity. We also noted the critical importance of reducing and managing cardiovascular disease risk factors; staying socially and intellectually engaged; getting adequate sleep and receiving treatment for sleep disorders as needed; and regularly reviewing health conditions and medications
that might influence cognitive health with a physician. What’s on your radar for future research? We are looking at what types of exercise lead to the largest cognitive and brain benefits. Dance is
particularly interesting because it’s physical, social and intellectually complex. Defining the optimal doses of exercise, and how these might differ with age, health and other factors are also a focus. We are working with children, who increasingly suffer from adult diseases like diabetes, due to obesity and inactivity. And we want to determine whether a combination of nutrition and exercise provides greater benefits than either of these factors alone. The definitive answers have not yet been found. We’ll continue to seek them out, to ensure we don’t just live long, but live well.